Our messenger for this forecasted period is the Ace of Wands, a card of great significance and influence which signifies movement and flow. The Aces of the deck are the highest and strongest cards of each of 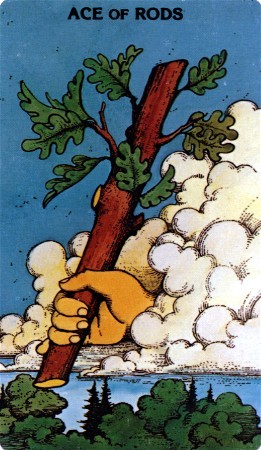 the suits of the Minor Arcana, and they represent the highest degree of the elements and energies for which their suit is symbolic.

The suit Wands is the suit of action and flow. It is the representation of the element of fire and rules the vibratory tones that affect movement, opportunity, communication, expression, education, as well as new beginnings thoughts and ideas and the overall sense of community. The movement created by the suit of Wands has the propensity to occur more organically than most of the other suits if approached with lesser resistance.

Being the representation of the element of fire, the suit of wands comes to bring about purification accompanied by clarity, for the creation of an unfettered progression toward new and idealistic achievements. The Ace of Wands freely illuminates and strives to achieve light in the darkest, and most obscure recesses of our thoughts with the intention to move us forward in growth and possibility.

The fall of the Ace of Wands represents the opportunity of a dawning of a new era, and a shift in thinking or position with unlimited potential. Its purpose is to illuminate any areas of discordant and troubled thoughts and to clear away fear, confusion, and stagnation, allowing more apparent movement and flow to allow opportunity, growth, and the ability to progress and embrace higher greatness. Individually, the Ace of Wands could bring clarity and resolution to issues in which communication has faltered, clear away uncertainties about the self or one’s future, usher in new possibilities for work and career such as new jobs, a shift of duties or promotions or even a complete career change. Doors are open for the transition to a higher vibratory tone. Opportunity abounds for the creation of clarity, understanding, progression, movement, and new and fulfilling achievements. In the present moment reveals a time to connect your wagon to the stars, take intelligent risks, and be clear in the direction of choice, and fully open to new possibilities.

The Ace of Wands ushers in higher levels of communication and connectivity to the self and others. Be open to listening, and hear new ideas and different perspectives as they could provide great edification. The Ace of Wands, being the ace of communication projects the hope that openness can and will be in the hearts of the world community as a whole, finding peace and the ability to work together for the unfolding of our highest greatness.

Tarot forecasts are like reading a horoscope in the newspaper or a magazine. It is an observation for the general public based on the drawing of one card for every ten-day period of the month. Check in again on November 10, 2016, for the next forecast relating to November 10-20, 2016.