The messenger for this forecasted period is the Four of Pentacles, a card that represents economic achievement and a positive indicator overall, for the most part. Although, this messenger is among a group of cards that speak more in generality and gains more in-depth indication by the other cards that accompany it in a rea 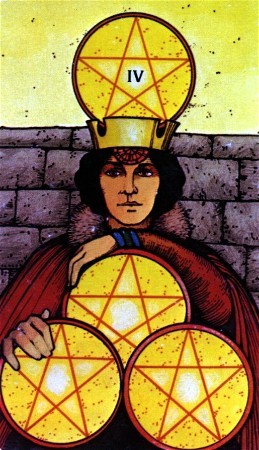 ding and fall closest to it in the spread.

Personal assessment is always necessary with the fall of our current draw because it’s a card that can easily represent two or more different energies or a movement of shifting between them. The lesson of the Four of Pentacles is less about physical aspects of finance and empowerment, but much more about the mental attitudes about them.

The positive indication of the Four of Pentacles is economic achievement and stability.  It is a card of mental stability and impeccable will and persistence. The level of greatness available for success with the fall of this card is quite high, because the vibration of 4 is strength, stability, fortitude, and accentuates the necessity of creating things with solid foundations.

When the Four of Pentacles falls in a standard reading, it is important to look at the cards that fall closest to it for a better understanding of its real indication and level of energy.  In times of financial crunch, the Four of Pentacles can be a fantastic indicator of oncoming abundance.

The more challenging indications of the Four of Pentacles are an unhealthy fixation on money matters such as obsession, stinginess, selfishness, manipulation and deceit regarding things that are financial in nature.   This unhealthy obsession is fear-based and stems from an underlying internal sense of lack, which is illusionary; but what we put our focus on is most likely what we will tend to create.

A notable fact is that the suit of Pentacles does not just rule money, but also power, life force, ego, mentality, and politics are also under its reign.  When applying the multiplicity of the Four of Pentacles to any issue, financial or otherwise, the concern is that focus to the point of obsession about anything will create a mental gridlock that can stop the free flow of that which we desire.  I state this in my readings as:

“There is so much focus that nothing gets in and nothing gets out; there is no room for change, growth or progression.”

What is important to remember is that based on the laws of karma, anything that one puts forth in a vibration of love and goodness can return multi-fold if there is indeed the willingness and openness to receive.

The Four of Pentacles has indications of walling ourselves in by our opinions, egos, and demands.  I sense that the fall of the Four of Pentacles is a reminder for us to continue our pursuit of keeping our hearts open and our minds alive with intentions of creating from the light, not darkness.  What we put out is what we muddy the universal waters with and what we will receive back.  All in all, instead of being focused only on what we desire personally, work to embrace the good of the whole community, the state, the country, the continent, and the entire planet overall.  Finding UNITY as the greatest source of all things is the golden key.

Tarot forecasts are like reading a horoscope in the newspaper or a magazine. It is an observation for the general public based on the drawing of one card for every ten-day period of the month. Check in again on November 20, 2016, for the next forecast relating to November 20-30, 2016.