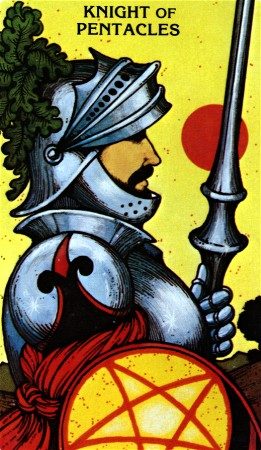 The Knight of Pentacles is the messenger for this forecasted period; this knight a knight of action, movement, empowerment, and financial fortification.  The Knight of pentacles is a positive indicator.  When a knight is in play, it is of great importance, because of all the court cards of the minor arcana, the knights carry the greatest influence.  They are the work horses of the suit, and instigate action and bringing things to fruition.

The Knight of pentacles is dependable, stable, and practical. He is hardworking, and his focus leans strongly on stability. His is the energy of patience and perseverance toward achieving goals.  He urges us to seek out and focus on the big picture, and the final act of the play.

The indication of the Knight of Pentacles in this tarot forecast is to solidify our visions for the future; to create a solid mental and emotional image of not just what is desired, but what we are willing to work toward.  One can have all the best intentions in the world, but if the intentions are not accompanied by the willingness to do the necessary tasks for creating the outcome, it is simply a waste of energy.

The blessing indicated with the draw of this card is that positive efforts will be rewarded. Even efforts that may not be in physical form.  Planning, strategizing, and creating an outline for the desired outcome are just as noble to pursue.  It is important too for us to trust and to know; if you can mark one thing off your list of deeds needed done for the creation of your desired outcome, it is an accomplishment and will lead to even further actions.

The Knight of Pentacles loves routine.  It is important to buckle down putting focus on creating and living by a routine that is practical and possible.  Setting goals too high or too low will lead only to frustration and a sense of stagnation.  The energy of this particular knight is also one who plays his cards much closer to his chest.  The message at this time could be to keep your considerations within your own heart now, until you have them firmly crafted and have created a stable plan.

The appearance of the Knight of Pentacles in this tarot forecast is a sure sign of tremendous positive movements and breakthroughs in process at this time.  The essence of alchemy blends all the elements together to create the desired outcome. For good measure give thanks for unknown blessings already on their way!

A Tarot forecast is similar to reading a horoscope in the newspaper or magazine. It is an observation for the general public based on the drawing of one card for every ten-day period of the month. Check in on September 20, 2016 for the next forecast relating to September 20-30, 2016.