The messenger for the conclusion of September is none other than the highest ruling card of the tarot. The Magician, a card rich in symbolism and depth of meaning. A member of the Major Arcana, the Magician is representative of God, the universe, creator, and source. 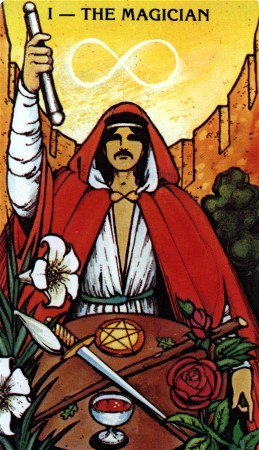 Some of the most powerful symbolisms employed by this card are:

His stance: with his right arm pointing up and the left pointing down, his body makes the shape of the Hebrew letter: Aleph, which represents creation, rebirth, and new beginnings.

Observing the table that is before him it is evident that each of the four suits of the Tarot is represented, symbolizing that all tools necessary for the journey are readily at hand.

The symbol of infinity appears above his head, which is infinite wisdom, regeneration, and tremendous energies of healing.

The Magician is about making the highest and absolute best use of all one’s power, whether it be in physical, spiritual, or emotional form. Our messenger for this forecast is quite a great card signifying new beginnings and rebirth. It invites us to allow higher expectations.  It’s a very powerful and positive messenger in a reading. It is reminding us that we have the power to make a difference, in our lives and the lives of others all over the world, If we apply all our talents and efforts to do so.

Signs can abound in subtle happenings or epic events.  The call at this time is for awareness of the signs around us to ensure we’re receiving every possible navigation to improve and empower.  The Magician can usher in tremendous wisdom, which could be right at hand. Remember that the smallest impressions may be linked to the highest of blessings.

The Magician is a card, which can have ruling and effect in all aspects of life. It’s a profound sign of active movement in the fields of one’s general well-being, work, finances, health, and also in love.  What is required is the balanced alignment of intention and effort. Intention without effort can yield little, but when we apply the two energies with wisdom, and balance of will, the possibilities are limitless for creating a new lease on life.

The Magician is the king of manifestation and now can surely be a time to redefine what we desire and shoot for the stars in doing so.  A profound practice of writing out that which you wish to create, and just putting it in a drawer and leaving it can be a powerful tool in creation.  Releasing outcomes to an unlimited universal source gives allowance for these things to become manifested by energies much greater than our own.  Holding attachment and constant focus can be a distraction and limit creation to our individual power, which is not optimal.

Tarot forecasts are like reading a horoscope in the newspaper or magazine. It is an observation for the general public based on the drawing of one card for every ten-day period of the month. Check in on October 1for the next forecast relating to October 1 – 10, 2016.